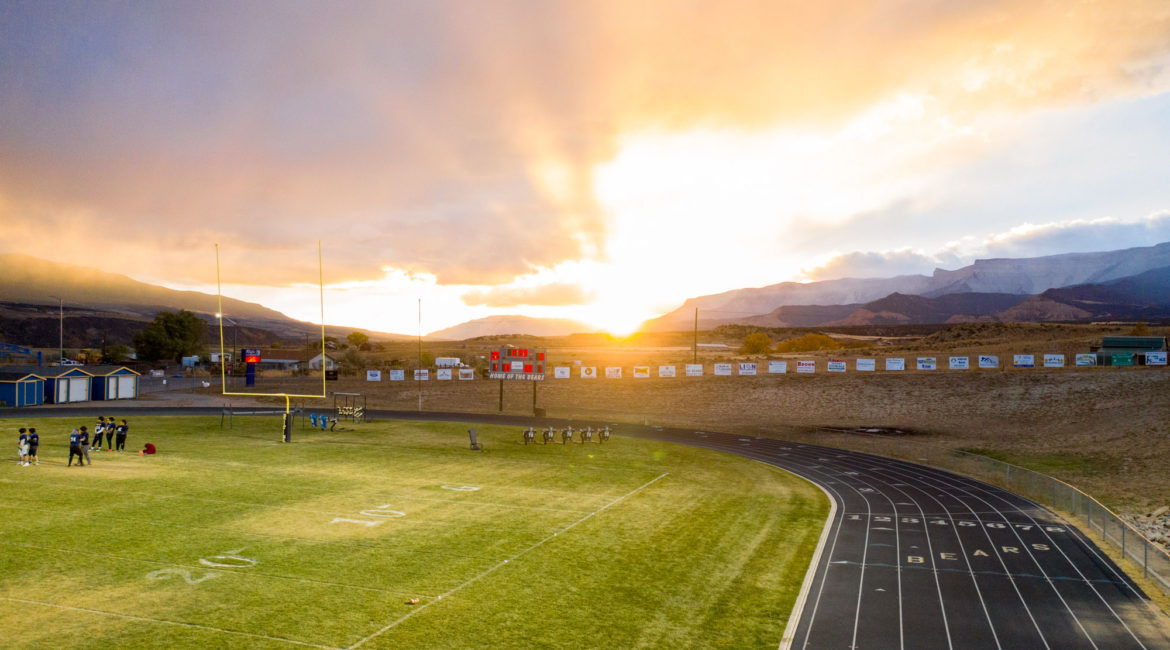 This time of year is like Christmas to high school football fans, parents, players, and coaches.  Are we in the playoffs?  Where will we be seeded?  Who will we play?

You have questions.  We have answers.

We will know all of the answers sometime tomorrow morning, but in the meantime let’s speculate a bit.

First, and most importantly, the Bears are in.  There are two ways to make the CHSAA 2A playoffs under the current rules.  #1) Win your league.  Or #2) Place high enough in CHSAA’s RPI algorithm to make the final 16.

The Bears have done both.

Rifle sewed up the league championship with their win over Basalt last week and thereby guaranteed themselves a spot in the playoffs.  Furthermore, by both being a league champion and coming in among the top 16 teams in the RPI (Rifle is 2nd as of this post), the Bears are guaranteed a home game next Saturday.

That much is clear, but the questions of the Bears’ exact tournament seeding and Rifle’s first opponent are still fairly murky.

Rifle is currently ranked 1st in the Coaches’ poll, 2nd in the Maxpreps Poll, 2nd in the RPI and 3rd in the Packard poll.  All of these polls may change once the final tallies are taken some time this evening or early tomorrow morning.

Rifle’s win over a potential playoff team in Moffat County on Friday helped the Bears jump Resurrection Christian in the preliminary RPI released earlier today.   The Packard results have yet to be posted for this week, but it is certainly looking like the Bears will be at least a 2 seed and if they can pass Sterling in the Packard algorithm, they may very well earn the top seed in the 2019 2A playoffs.

It is way too convoluted to try to guess at a first-round opponent for Rifle, but since it is fun to speculate, there are a few options to consider.

With the way the 2019 season has played out, it is also now clear that there will be at least two teams from outside the top 16 in RPI that will make the playoffs. This is because they will win their league championships and according to CHSAA 2A playoff rules they will therefore be included in the playoff bracket. These teams will bump out the lowest-ranked RPI teams (currently #15 University and #16 Weld Central) but by rule they will not be placed in the top 8 and given a home game. Previously teams like this have been seeded between #9 and #12. But the seeding committee has the prerogative to place these two teams anywhere between #9 and #16.

In 2019 there are two league champions that are outside the final RPI top 16.  Those are  Englewood with a 7-2 overall record and Pagosa Springs with a 5-4 overall record.  If the committee chooses to seed these teams at the bottom of the bracket, Rifle could face either team, but Pagosa Springs seems more likely based upon travel distance, which is a factor that can be considered by the committee in the seeding process.

Pagosa has been playing their best football late in the season.  After dropping  a lot of games early in the season, including losses to familiar Rifle foes Moffat County and Basalt, the Pirates have quality wins over Bayfield and Alamosa to end the year.

Englewood on the other hand has made the best out of a relatively weak schedule by winning 7 games in 2019.  Englewood (also the Pirates) have a quality win over traditional 2A powerhouse Kent Denver as well as a non-conference victory over bubble-worthy Weld Central.  They wrapped up the 2A Colorado league title with a 22-6 victory over Ridge View Academy today.

If the committee decides to place these two league champs higher in the bracket the Bears will likely face a handful of teams.  La Junta is currently ranked #14 in the RPI and as of this writing would be the last team in.  However they played (and won) a Saturday game against a low ranking foe–strength of schedule matters–so they may drop below #14 when the final RPI tally is taken.  This would likely mean that University would move into the playoffs.

La Junta is the defending 2A state champs and have experienced a down year in 2019.  At 5-4, they failed to win their league and are riding a huge bubble in the closing hours of the 2A playoff hunt.  If they make the playoffs, their previous playoff experience alone would make them a well-above average #15 or #16 seed.

If University sneaks in in La Junta’s place, the 5-4 Bulldogs would most likely be a 16 seed facing off against the #1.  University played in the same league as Resurrection Christian and Eaton so they should be a battle tested squad.

There is an outside chance that Rifle could face Bennett.  The Tigers are currently 12th in the RPI and could feasibly face off with Rifle if 1.) they drop in the final RPI or 2.). both Pagosa and Englewood are seeded above them by the committee and Rifle is seeded 3rd.  Bennett lost to Delta by 40 plus points earlier in the season.

It should be a very interesting 16 hours or so.  Stay tuned……