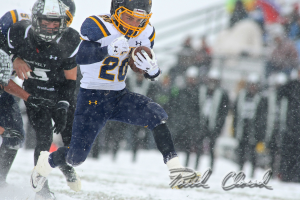 Fort Morgan is 10-2 on the season and is the 2014 runner up in the Colorado 7 League. The Mustangs dropped games to 2A rival Brush (35-3) and conference foe Lutheran (22-16). In the playoffs, Fort Morgan has been especially impressive. First was the 35-18 dismantling of a Holy Family team that many in the state saw as a state title favorite. Next, the Mustangs knocked off undefeated (and No. 2 overall) Evergreen on the road 13-7.

The Fort Morgan offense is run heavy but they have shown the ability to throw the ball when necessary. Sophomore running back Tate Kembel (#20) leads the team in rushing with 1182 yards and 21 touchdowns. Blocking for Kembel is 6’3″ 235 pound junior fullback Toby McBride (#32). McBride has 515 yards in 2014 and is a leader on defense as well with 93 tackles. Junior quarterback Joey Schneider has thrown for 1016 yards on the year with a .478 completion percentage and a 89.0 quarterback rating. His favorite target is senior receiver Eric Kembel. Kemble has 15 catches on the year for 202 yards.

How the Teams Match Up

The Fort Morgan defense is the best in the state as far as points allowed this season with 96 points given up in 12 games. In Rifle’s 12 games this season, the Bears have given up 104 points, ranking the Bears 3rd overall. Offensively, Rifle has been more prolific in 2014 than the Mustangs. The Bears have amassed 494 points on the year while the Mustangs have tallied 466. The Bears and Mustangs are ranked 4th and 5th in that category respectively. Per game, Rifle averages 88.6 yards through the air and 295.8 on the ground while Fort Morgan averages 84.7 passing yards and 192.6 on the ground.