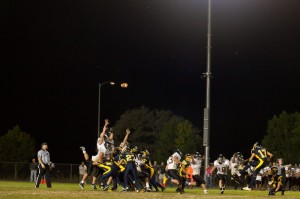 It looked bleak for awhile.

With 1:31 left in the game, the visiting Battle Mountain Huskies scored a touchdown to take a 21 to 19 lead.

It looked even worse a few plays later, after three straight incompletions by the Bears offense.  Then quarterback Adam Rice sprinted left, stopped turned and scrambled back to the right and found Taylor Webb for a long gain into Huskies territory.

With time ticking away, Bears kicker Marco Gutierrez lined up for a forty-five yard field goal.

His kick would have been good from 52.

The made field goal sent the Bear’s sideline into a wild celebration and after one last-ditch play by Battle Mountain, Rifle had its fourth victory in a row.

The game started as a defensive struggle and the Huskies held a 7-6 lead at halftime.  Rifle and Battle Mountain then traded the lead back and forth during the second half leading up to the miraculous finish.